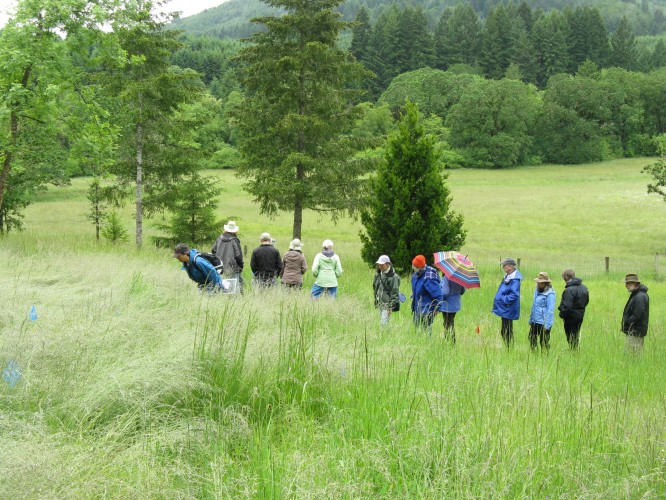 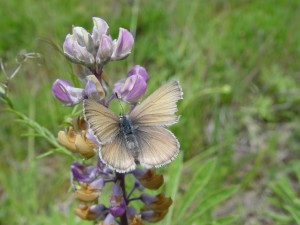 “There’s one!” calls a tall guy in an olive-drab raincoat. Slowly, gingerly, several members of the group step through the wet wildflowers toward the place where he’s pointing. There sits a tiny butterfly, no bigger than an inch from wingtip to wingtip. Digital cameras emerge from jacket pockets to capture the pale, bluish insect, nearly camouflaged on a pale, bluish blossom, the Kinkaid’s lupine, upon which the butterfly depends for sustenance throughout its lifecycle.

The tiny winged creature is a member of an endangered species — the Fender’s blue butterfly — newly emerged from its pupa and collecting nectar on a wildflower that is itself becoming more and more scarce.

Getting a glimpse of the rare butterfly is a testament to the success of a long-term, multiagency project to restore native grasslands in the rural community of Wren. For the 15 people taking the Watershed Council’s Memorial Day prairie restoration tour, the Fender’s blue sighting confirms the soundness of the presentations by scientists, landowners and local consultants who are on hand to show off the results of nearly a decade of restoration efforts in the gently rolling hills along the Marys River. The multi-phase project — led by the Watershed Council and the Oregon Department of Fisheries and Wildlife in collaboration with a number of landowners, Oregon State University and other partners — aims to reclaim the oak woodlands and flower-studded grasslands that have been lost to agriculture, fire suppression and conifer encroachment over the past 150 years.

Kate McGee has seen “huge changes” on the acreage where she and Scott Lesko have been “freeing” oaks, eradicating thistle, and planting lupine since 2008. “We’ve seen things we’ve never seen here before, like acorn woodpeckers,” she says. “I saw an Ana’s swallowtail lay an egg on a lomatium (a native wildflower).”

McGee stands beside the meadow listening as Lesko tells the prairie tourists the couple’s personal restoration story: cutting dozens of Douglas firs to let sunlight reach the native white oaks. Spraying harmful invasive weeds that were choking off wildflowers. Hovering over the reclaimed meadow with the anxious concern of a new parent. She looks at the blue flags dotting a stand of fescue to mark the lupine starts and thinks about how far she and Lesko have come under the Watershed Council’s guidance.

“The Kincaid’s looks like it’s really settled in,” she says with satisfaction. “I feel fortunate to be a part of this.”

Henry Storch is a familiar presence in Wren, traveling the back roads in a dusty truck advertising his farrier service. But shoeing horses is just one of his trades. He keeps bees, too. And he sells native seeds. He knows wildflowers backwards and forwards, which puts him in high demand for the restoration projects underway in Wren.

Walk around Wren with Storch – whose grandmother taught him Latin at age 4 — and within minutes he’ll have your head spinning with flowers, bees, and random bits of horticultural information: Rose checkermallow (“a nice native”). Callicordis (“primo nectar for the Fender’s and the Taylor’s checkerspot”). English plantain (“the principle host for the Taylor’s). Camas (pretty basic). Bombus mixus (“a cavity nester”). Wyethia (“native sunflower”). Vetch (non-native, but functional for pollinators. Bombus Californicus. Lupinus organus (“a hybrid species with a really stinky smell).

As manager of the Watershed Council’s Nectar Network project, he has sown thousands of seeds in dozens of meadows. One of these meadows sits next to Lumos Winery off Cardwell Hill Road. Formerly owned by Lumos, the meadow was sold to Benton County in 2007 to help save the Fender’s blue. This critical habitat is home to one of the biggest remaining populations of the butterfly.  Based on studies suggesting that the Fender’s blue is hesitant to fly into shaded woodlands, the Watershed Council has taken out stands of conifers that divide one meadow from another. Creating corridors from one grassland to another creates a more robust population of butterflies with greater genetic diversity, explains Karen Fleck-Harding, the landowner outreach coordinator for the Council. Adds Storch: “We have these little pockets of habitat, but they’re not that valuable if they don’t get connected together.”

Fleck-Harding points out a cluster of finger-like foliage in the dewy meadow. “The Kinkaid’s lupine holds a drop of water in the center of its leaves like a crystal,” she says. Wild iris is growing there there, too, along with a stridently yellow wildflower called Oregon sunshine. Wild strawberries peak from the greenery, red and plump and irresistible to the humans walking among them. “Strawberries surviving out here means there’s not a lot of competition from tall grasses,” says Fleck-Harding. “It’s an indicator of a healthy meadow.”

Among the landowners Fleck-Harding has worked with is Susan Smith. Every day, Smith walks out to the field where she and her husband are waiting for the Fender’s blues to find their newly bloomed lupine. She hasn’t seen one yet this year. But she has seen more wildlife since they started their restoration, including pileated woodpeckers on Doug firs de-limbed to create oak habitat, now serving as wildlife snags. “We used to have just a thicket out here,” says Smith. “Now we have two nice oak woodlands. It’s really pretty. It was exciting to find out that we have something worth saving and preserving — that we could contribute to saving the butterflies and help protect the area for years to come.”