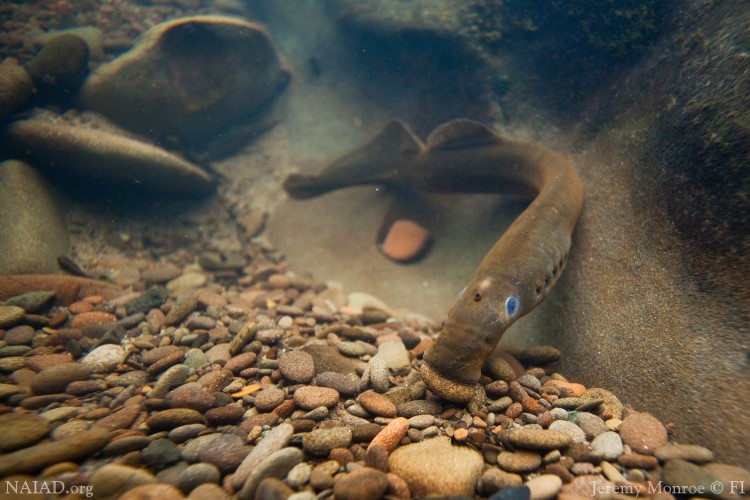 “Lampreys are delightfully bizarre fish — and vastly underappreciated for the role they play…in ecosystems.” Center for Biological Diversity

Pacific lampreys are ancient animals, emissaries from the Paleozoic era. For 500 million years, these eel-like fish evolved and adapted, inhabiting the Columbia River and its tributaries in numbers too vast to count. In the past century, however, these tenacious survivors have been on a steep slide toward extinction.

For too long, lampreys have been overlooked, overshadowed by the majestic Chinook that shares its waters. The lowly lamprey is, admittedly, an oddity of nature. Blind and nocturnal in their early years, juvenile lampreys leave snaky tracks on the river bottom when foraging at night — their only visible sign after disappearing again into the sediment at daybreak. After migrating to sea, where they grow from pencil-length to yardstick-length, they return upstream to spawn. With powerful suction cups for mouths, they can climb waterfalls by repeatedly sucking onto the slippery rock face and jumping upward, sometimes ascending hundreds of vertical feet. They also use their suckers to pick up and move large stones to build their redds (spawning nests). Another ancient feature: the lamprey has no jaw. In fact, it has no bones at all. Without bony skeletons, their bodies can swell and shrink to withstand the vagaries of life cycle and food supply. They can plump up hugely to accommodate an egg sac of 100,000. And they can shrivel down to practically nothing when food is scarce.

This biological bizarreness may have blinded humans to the ecological importance of these creatures — at least until recently. As Pacific lamprey populations have plunged, scientific interest has risen, according to Carl Schreck of Oregon State University.

“Thirty-five years ago when I started my career, there were zero papers on lamprey presented at meetings of the American Fisheries Society,” says the fisheries biologist. “These days, there are whole symposiums on lamprey.”

Now scientists have turned their attention toward the Marys River. As part of a three-year study in the Willamette River Basin, a team led by Schreck and OSU research biologist Lance Wyss is conducting surveys to estimate abundances of lamprey and characterize their habitat in the Marys mainstem, as well as other tributaries of the Willamette River. Of these, the Marys shows the lowest number of redds from spawning surveys. “There appears to be a shortage of spawning habitat in the Marys,” Wyss suggests, but acknowledges that it is too early in the study to say for sure.

Spawning habitat in many Northwest rivers, including the Marys, was lost last century when the streams were channelized (straightened) to reduce flooding on farmlands. Diminished were the curves and eddies where waters pooled, where silts and sands settled, and where fish rested. Without this natural “channel complexity,” a river’s fast-flowing waters scour out the cobbles and gravel beds that lamprey need for egg-laying. These cobbles and gravel beds happen to be the same ones salmon need for their egg-laying.

But spawning beds are only part of the picture of lamprey decline. To uncover other factors harming the fish, the researchers are looking at pharmaceuticals accumulating in sediments, industrial chemicals polluting streams, dams blocking passage upstream — basically “the whole shebang,” in Schreck’s words. “Whatever’s bad for lamprey is bad for salmon, and vice versa,” he observes.

This mutualism might seem contradictory, given that lamprey are parasites that attach themselves to salmon and suck their blood (another trait that fails to endear lamprey to humans). But ecosystem dynamics are always infinitely more complex on deeper analysis than they are at first glance. Turns out, lampreys are scrumptious, fat-filled delicacies for salmons’ principal predators. A sea lion, for instance, will eat 30 lampreys for every salmon it devours, according to Schreck and Wyss.

The ancient lamprey holds a place of high honor for another ancient population: the tribes that sustained themselves for countless generations on the Columbia River Plateau and along the watersheds that are drained by the mighty river. Lamprey, which once ran thick in the swift waters, were a critical food source between salmon runs. The tribes called lamprey “the food of the hunger months,” Schreck says. It is these tribes — the Umatilla, the Warm Springs, the Grand Ronde, the Siletz — that are spearheading much of the lamprey research through the Columbia River Inter-Tribal Fish Commission.