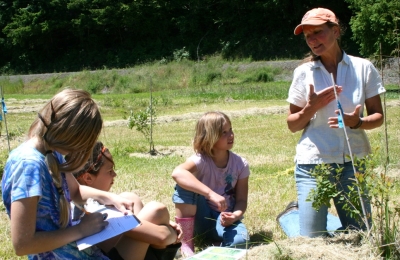 It’s a late-winter Saturday at Fern Road Farm in Philomath. Squalls are spitting rain, leapfrogging across the landscape with tepid snatches of sun. Along the Marys River, a crew of volunteers is hard at work planting seedlings and building beaver barriers to restore lost vegetation. Kathleen Westly, her hair tucked inside her trademark blue felt hat, is showing the volunteers how to construct wire cylinders to protect the tiny trees from gnawing teeth.

Watching Westly in her rubber boots and work gloves slinging bundles of bamboo poles and bails of chicken wire, it’s hard to picture her in the tailored suits she wore in her previous career as an account executive for Xerox. It’s hard to imagine her in pumps and matching briefcase, negotiating million-dollar deals for “Big Eight” accounting firms in places like Southern California and the industrial Midwest.

“The first time I walked up to Chicago Board of Trade building — this venerable old building that’s a historic landmark in the city — I remember feeling like Dorothy,” she says. “I thought, ‘I’m not in Kansas anymore.’”

Westly’s “Kansas” was, in fact, the Pacific Northwest, where she grew up tramping forests, mountains and beaches on family camping trips. When she looks back on her childhood, what comes to mind most vividly is the vegetation: Pacific dogwood and Indian paintbrush. Coast pines sculpted by sea winds. Madrone wrapped in ribbons of papery red bark. Hemlock draped in lacework of fine green needles. Wild huckleberries, plump and purple, on the pre-blast slopes of Mount St. Helens.

It’s not surprising, then, that she eventually donated her tailored suits and “those ridiculous shoes” to Goodwill and returned to Oregon with her husband to raise their three children. Nor is it surprising that trees and landscapes and streams sit at the heart of her new work as Education and Riparian Planting Coordinator for the Marys River Watershed Council.

“I always felt like I lacked a sense of purpose at Xerox,” says Westly, who earned degrees in history and business administration at Lewis & Clark College after graduating from Hillsboro High School.

Back in the Northwest, she and her family are making a life on 14 acres with a vegetable garden (planted with lots of kale, chard and winter squash) and four pigs (so her kids wouldn’t think “meat comes on a Styrofoam tray”). The clan includes Copper, the border collie (who herds everything from pigs to flotillas of river rafts), and Shadow, the cat (so named because she chased her shadow as a kitten). Raising children, harvesting food and caring for animals have taken Westly a long way toward a sense of purpose. Helping to found Muddy Creek Charter School after the closure of Inavale helped, too. So did serving on the board of Logos House (now defunct), a Christian studies center for college students, offering courses in such topics as wisdom literature, Earth keeping and the writings of C.S. Lewis.

Her spiritual life manifests strongly in her ministrations to the Earth. “We humans are creatures of place,” she says. “I believe we are meant to be stewards of what we have been given.”

Education and restoration are constant themes in Westly’s life. So her twin roles at the Council not only complement each other perfectly, but also complete her sense of purpose. One week, she’ll be demonstrating beaver barrier construction to Oregon State science majors down at the Marys River. The next week, she’s leading a fidgety band of fifth-graders as they touch their first garter snake, paddle their first canoe, plant their first willow or pull their first weed. “I love it, love it, love it when I see kids engaged with the land and the animals in the watershed,” she says. “It’s super-gratifying.”