Fish Friendly Crossings: Seven culverts were replaced on Shotpouch Creek and its tributaries to assure that fish, lamprey and other aquatic life would have year-round passage to access spawning or rearing habitat upstream.

Large Wood Placement: With the participation of nine landowners, 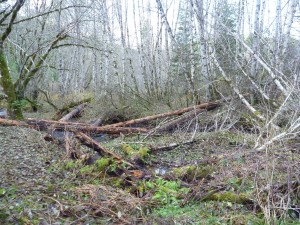 Shotpouch Creek was enriched with large wood to trap gravels and increase the complexity of the stream channel and its interaction with the floodplain during normal winter flows. Thirty-one large wood placements, each made up of two to ten 60 foot long Douglas fir logs, were placed along 4.2 miles of stream. An additional 5.5 miles of middle and upper Shotpouch Creek would benefit from similar large wood treatments in the future.

Some of the logs are expected to provide additional winter stability to beaver dams. Beaver are a key contributor to maintaining stream habitat for fish, birds and other wildlife on Shotpouch Creek. Beaver ponds significantly increase the available summer and winter rearing habitat for cutthroat trout and steelhead.

Riparian Planting & Livestock Fencing: As of early 2015, fourteen landowners will have 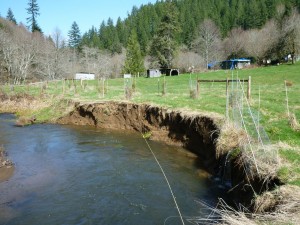 partnered with the Council to plant 39 acres along 2.75 miles of Shotpouch Creek along with 3.3 miles of livestock exclusion fencing. Much of the banks of lower Shotpouch Cr had displayed the effects of riparian grazing, with steep failing banks. Annual maintenance of the plantings for 3-5 years will assure its successful establishment.

Off-Channel Alcoves: Two landowners worked with the Council to develop off-channel alcoves on their land that will provide slack-water habitat during high winter flows.

Bank Stabilization: Three sections of stream bank were pulled back to a 10:1 slope and planted with willow to arrest excessive erosion that was of concern to two landowners.

An article about this project and a follow-up editorial were published by the Corvallis Gazette Times in Nov 2011:

Shotpouch- Editorial: Restoring rivers, one neighbor at a time GT 2011_1115